A person does not grow from the ground like a vine or a tree, one is not part of a plot of land.  Mankind has legs so it can wander.  ~Roman Payne

Approximately a month ago we were seeking adventure for a weekend and had no idea what to do.  We, as usual, decided to “head west” with no destination.  The famous “no plan plan”.

We were getting on the ramp heading west when out of the corner of my eye I saw quite a site.  A man, full head of dreads, playing harmonica with a backpackers pack leaning on his leg and one thumb in the air.  I knew immediately he was joining the trip, there was no way we were passing this story up.

Well it turns out this “story” has become our friend and true adventurer Adi.  He has traveled more than most have dreamed.  From living with nomadic horsemen in Mongolia, to working in a tricycle factory in China.  Now he is on a mission to see the 50 states, but not just see them, experience them.

We took Adi for a beer, and then dropped him off at his destination with hopes we would cross paths again.  Well the next week we were headed to our house in the hills of Tennessee and figured it would be the perfect time for Adi to “experience” Tennessee life! 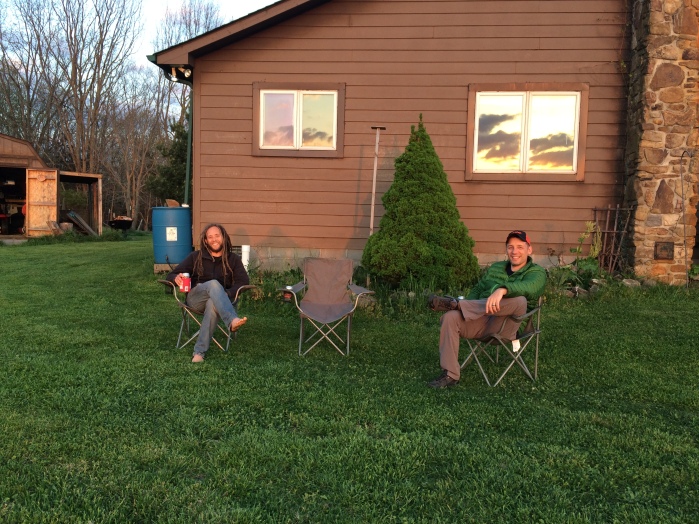 Well this past weekend we decided for another adventure and set our compass for North.  Adi had decided he wanted to see the Amish and get as close as possible so we followed suit.

We picked Adi up near DC and headed toward Lancaster.  We stayed the night at a little campground west of Lancaster so we could get an early start “hunting the Amish”.

Saturday was perfect, what we thought would be a trek to find the lone Amishman ended up being a journey through deep Amish territory.  Adi got to talk to real Amish folks, who very kindly answered most of his questions (whats the deal with Rumspringa, haha).  We saw so many horse and buggies I will be having dreams of them for weeks, and we forced Adi to break his vegan diet to try an official Amish “whoopee pie”.

We stayed the night at White Oak Campground in Quarryville, PA and had an absolute blast.  From seeing horse and buggies pass by to our midnight drunken dutch oven Hummus making it was one for the books.

We said our farewells to Adi on Sunday morning.  Truly one of the kindest, most whole heartedly adventurous people I’ve ever met.  If God is love, I know he is with you every day.  We look forward to the next chapter in the “Adi’s Adventures” book which is hesitantly scheduled for November (I secretly hope it is much sooner).

So if you see a dreaded out vagabond playing a harmonica hitching a ride, take a chance. The biggest risk of all is not taking one.

Josh and Christine are two wanderers just traveling on the "no plan" plan. We want to see all there is, do as much as we can, and spend our twilight years reliving it all while sipping sweet tea on a patio in Tennessee. But for now, we wander. View all posts by Two Wander

One thought on “A Man With No Nation”